Virtual Opening Reception of “Beyond the Earthquake, from Fukushima to the World”

Commemorating the earthquake’s 10th anniversary, The Nippon Club WEB Gallery will hold an art exhibition entitled “Beyond the Earthquake, from Fukushima to the World.”(Period: March 5 – March 31, 2021) In this exhibition, the contemporary artists who love the sea and pay homage to the ocean will introduce their works of art to honor the tsunami victims.
The exhibiting artists will talk about their works created in honor of the victims of the disaster. We are grateful to have Mr. Mickie Yoshino, a famous keyboard player, composer, producer, and arranger. Yoshino is known for leading the rock band Godiego. He graduated from the Berklee College of Music in Boston.

The opening reception will be held in Japanese, but The Nippon Club will be providing real-time subtitles in English through Wordly. 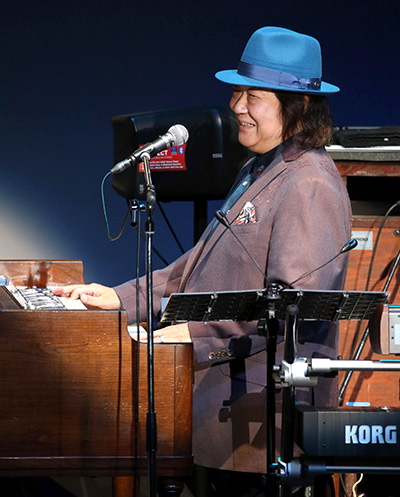 In 1968, he participated in “The Golden Cups,” which was said to be one of Japan’s most powerful Rock bands in the ’60s, and made a pro debut. He studied at Berklee College of Music in Boston in 1971 and also performs band activities in the United States. After graduating in 1974, after returning home to form an ideal band “Godiego,” after forming “Mickey Yoshino Group,” he formed “Godiego” in 1976. Godiego creates hit songs such as “Gandhara” and “Monkey Magic.” While performing a concert in Nepal, China, the United States, and Australia, it becomes a legendary band occupying a unique position in Japanese rock history. “The Water Margin.” The song got up to number 16 in the UK singles chart. He has also produced numerous hits in movie and CM music production, and won the 2004 Japan Academy Award for Best Music in the movie “Swing Girls” (Altamira Pictures). In 2004, the band members of Golden Cups regrouped to entertain. In 2006, the band members of Godiego also regrouped to entertain. In 2015-2018 appeared regularly on radio and TV shows: NHK radio “Shinyabin” and TVK “ Yokohama Hai Kara Night.” In 2019, won 1st place as the best pianist on “Teppen,” Fuji TV competition varsity show, which determines who was the best pianist is in the Japanese entertainment industry.