In Japanese society, which changed dramatically in the Meiji Restoration (1868), Japanese potters faced their daily work with absolute sincerity. The ideas they invested into their earthenware creations were made real in the forms of tableware or works of art, all of which were collectively referred to as “Old Noritake” and mainly exported to the United States. These pieces were subsequently passed on from generation to generation and have been treasured by the American people throughout the years hence.

Since modern porcelains exported from Japan after the Meiji era initially bore a back stamp of the country name: Nippon, they have commonly been referred to as Nippon and have become highly prized as works of art.

Nippon porcelains achieved prodigious sales volumes in the United States at their creation by overcoming high tariff barriers imposed on Japanese goods exported there. However, in response to a U.S. government ordinance that decreed that the country of origin’s name appear on imported goods marked in “legible English,” sometime around 1920, the back stamp on Japanese goods was changed from Nippon to Japan.

At around the same time, the American people, who had been fond of and often greatly respected European art and fashion, discovered the attractiveness of the American version of Art Deco and became highly enthusiastic about its designs. Designs of Japanese export porcelains also began to change from a style that focused on the tastes of foreign countries to this new American Art Deco. This exhibition is scheduled under the direction of Dr. Yoshie Itani (Project Professor, Tokyo University of the Arts).

At the exhibition, we will be tracing the histories of both genres by dividing the show into two parts; the first half focusing on the original Nippon porcelains created in the Meiji and early Taisho eras, and the latter half featuring Japanese products produced in the American Art Deco style.

We hope that this exhibition will provide viewers with an opportunity to reexamine not only the technologies and exquisite designs created by the original Japanese artisans who lived in modern times but also the sincere love of American families and their neighbors reflected in Old Noritake and to seek out what can be found in the years that lie ahead.

We want to take this opportunity to express our sincere appreciation to Ms. Junko Araki, Mr. Kazuhiko Kimura, Mr. Shinya Maezaki, Mr. Jun Mizuhiro, Ms. Itsuka Yakumo, and the Japan Porcelain Society for their cooperation and support in holding this exhibition.

Organized by The Nippon Club
Supported by the J.C.C. Fund (Philanthropic Fund of Japanese Chamber of Commerce and Industry in New York)
In cooperation with the Japan Porcelain Society
Directed by Dr. Yoshie Itani 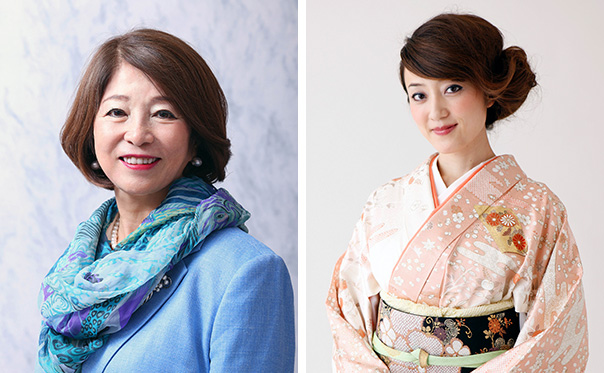 At the virtual reception, Dr. Yoshie Itani will give a lecture entitled “Brilliant sparkle of Modern Japanese Export Porcelain” and look back at this span of development of Old Noritake from that early post-Meiji period works to the Art Deco. In addition, as entertainment, we will welcome Japanese music player Kaho Aso, who will talk about the charm of small drums through stories about the musical instruments of small drums used in Noh and Kabuki and stories about musical accompaniment.

＊The webinar will be conducted in Japanese, but English subtitles will be generated in real-time by Wordly.
＊This event is an online event via Zoom.

Ms. Itani studied arts and crafts history at Kwansei Gakuin University’s Graduate School of Humanities. Upon obtaining her master’s degree, Ms. Itani moved to the United Kingdom for her husband’s job. She continued her studies of crafts (modern Japanese export crafts history) at the University of London’s SOAS Graduate School, where she obtained her M.A. (with distinction) in 2000. Following this, Ms. Itani entered the doctorate course of the University of Oxford’s Faculty of Oriental Studies and returned to Japan after obtaining her Doctor of Philosophy (DPhil) degree in 2006. While teaching Japanese arts and crafts history and the history of cross-cultural exchange in art, among similar aspects of Japanese art history, at various Japanese universities, including Tokyo University of the Arts, Kanazawa University, and Tama University, Ms. Itani was also engaged in writing activities and has been employed as the Project Professor of the Global Support Center of Tokyo University of the Arts since April of 2015. In September of 2021, Ms. Itani also took up duties as a guest professor at Teikyo University’s Department of Radiological Technology. Ms. Itani’s other social activities include being Chair of the Japan Porcelain Association, Vice-Chair of the Japan Coffee Cultural Society, Representative Director of the International Cultural Exchange Association, and Representative Director of the Asian Textile Culture Institute.

JKaho Aso holds a doctoral degree in music from Tokyo University of the Arts. Kaho is the
first person in the university’s history to earn a doctoral degree in the field of shamisen music
including hogaku-bayashi, traditional Japanese orchestral music. While an undergraduate, she was awarded the Ataka Prize to the best student in the university and made her stage debut in Rainbow 21, hosted by Suntory Hall. Working with various artists both in Japan and abroad, Kaho pushes the boundaries of Japanese classical music and dance by combining traditional Japanese art forms with Western music, art, and literature. She has recently staged a solo performance, “Giou” in the Tale of the Heike Monogatari and “Murasakinoue “in the Tale of Genji Monogatari, which synthesizes traditional music, dance, and acting. She is a lecturer at the Tokyo University of the Arts.