Photos by Hirotake Yamakita. Born in Shizuoka City, he grew up beholding Mt. Fuji in its various magnificence in each turn of the season. He started full-scale landscape photography with a single-lens reflex camera, as he inherited the relic of his grandfather whose hobby was watercolor painting. Since then, he has been devoting himself to Mt. Fuji in his hometown of Shizuoka and has continued to photograph Mt. Fuji.

Miho-no-Matsubara, a pine grove on the Miho Peninsula, well-known by its Hagoromo legend, is located at Shimizu-Ku, Shizuoka city in Shizuoka-prefecture. Noh titled as “Hagoromo” combines two legends which are the story in regards to the origin of Suruga-Mai, Suruga dance, and the descent of a Tennyo, a heavenly woman or nymph, onto the beach. Miho-no-Matsubara stretches 5 kilometers long with about fifty thousand pine trees along the beach. With blue sea, white wave spray, and beautiful Mt. Fuji views, the scenic spot attracts tourists all over the world. In every October, Miho-no-Matsubara Takigi-Noh Play, Noh play by firelight, is performed in front of the pine trees, on which the Tennyo is said to have hung her feather mantle.

The Miho-no-Matsubara Hagoromo legend had given a significant influence on the culture of Japan. Musical performance and dance by Tennyo have been considered as the initial Japanese work in the Gagaku, a piece of classical Japanese court music, and is being played still now in the imperial court and some other places like shrines. Unchu- Kuyou-Bosatsu, 25 singing and dancing Statues of Bodhisatva, in Byo-do-In Temple is considered to express the thought on the world of music and dance. “Hagoromo” is currently being performed as the typical play of the Noh. Tennyo hovers in the beautiful scenery of Miho-no -Matsubara, a pine grove on the Miho Peninsula, and Mt. Fuji and rises high up to fade away in the fog.

“Fuji-Shinko, which regards the mountain itself as a god, is the animism that perceives Mt. Fuji has some spiritual value and power. However, it has a history of prayer asking for quieting the repeated large-scale eruption seems to have turned into mountain worship. Mt. Fuji was added to the UNESCO World Heritage Site List in 2013 as “Sacred Place” and “Source of Artistic Inspiration.” Miho-no-Matsubara conveying the beauty of Mt. Fuji is also added to the UNESCO World Heritage Site List as “Artistic source for Poetry and Paintings.”
We are proud to introduce 36 paintings and photos of Mt. Fuji and Tennyo in relation to the Hagoromo legend of Miho-no-Matsubara.
Exhibition Artworks
① 19 of paintings related to Mt. Fuji and Hagoromo Legend
② 10 of “Unchu Kuyo Bosatsu” in BYODOIM
③ 7 photos of Mt. Fuji by photographer, Hirotake Yamakita
Organized by The Nippon Club
Supported by the JCC. Fund
(Philanthropic Fund of Japanese Chamber of Commerce and Industry in New York)
In cooperation with:
Aichi Prefectural Museum of Art, Akita Museum of Modern Art, Shigyo Soshu Collection,
Shizuoka Prefectural Museum of Art,
Shizuoka City Miho no Matsubara Culture and Creativity Center-Mihoshirube,
Shizuoka City Tokaido Hiroshige Museum of Art, Tokyo Fuji Art Museum,
Nagashima Museum, BYODOIN,
Fujiyama Museum
Director: Yui Morita
Curator: Shoko Hayashi 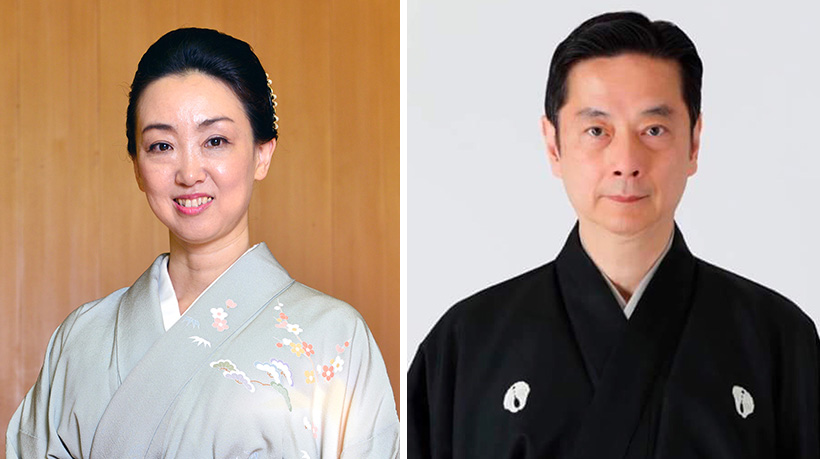 Ms. Yui Morita (Associate Professor, Tokyo Rissho Junior College) (left photo), who directs this exhibition, will introduce “the legend of Hagoromo” in Miho no Matsubara. In addition, Mr. Genjiro Okura (right photo), a Living National Treasure, will talk about the composition of one of the most representative Noh plays, “Hagoromo,” and then will show us a performance of “Kotsuzumi.” In cooperation with Mr. Masaki Umano, Kanze-style Shitekata Noh performer.

＊The event will be held in Japanese, but The Nippon Club will be providing real-time subtitles in English.