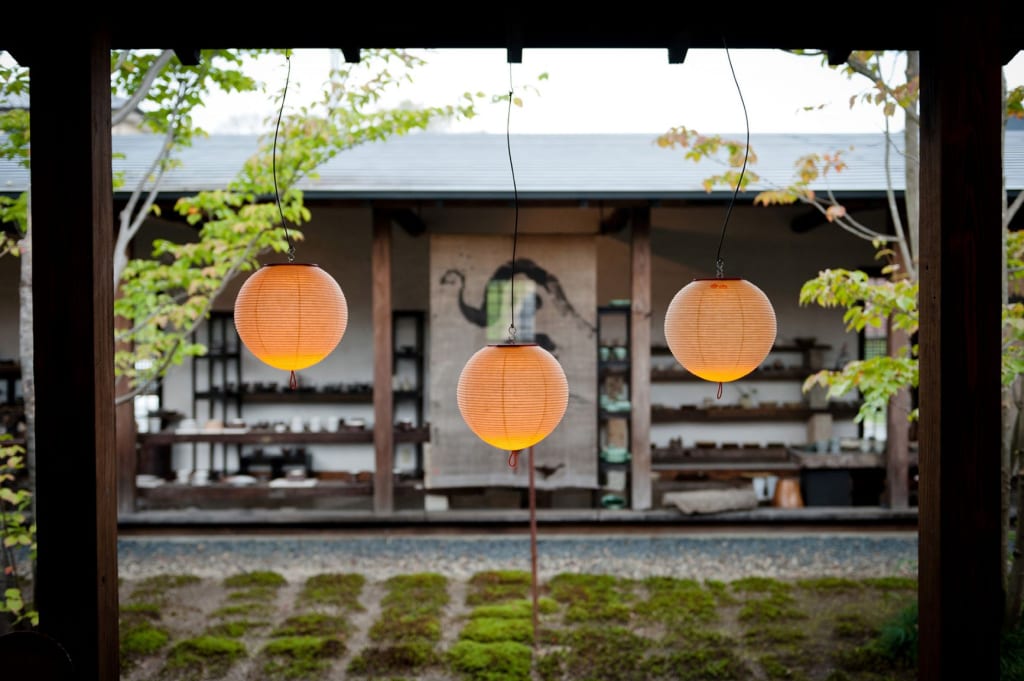 At the opening ceremony of the Tokyo Olympics on July 23, 2021, many lanterns assembled in wooden frames were displayed. Lanterns are one of the traditional representative crafts of Japanese culture. In this exhibition, we will take up the traditional craft of Ibaraki prefecture, “Suifu lanterns,” and introduce the history and manufacturing process of lanterns that have been used as lighting fixtures that are indispensable for our daily lives.

In the Edo Period (1603-1868), the lower class samurai of the Mito clan began making chochin as a livelihood. As the leaders of the Mito clan gradually began to support this industry, more and more chochin produced in Mito came to be used in other cities, including the capital city of Edo. Suifu chochin is known for its sturdiness and simplicity because it is made by making individual rings of bamboo and binding them together with string, making for sturdier construction. The Japanese washi rice paper used in the lanterns is “Nishinouchi paper,” the development of which was also promoted by the leaders of the Mito clan. Even tougher and more substantial than typical washi, this paper is another reason why Suifu chochin are as sturdy as they are. Even now, votive lanterns, festival lanterns, signboard lanterns, etc., are made with Japanese paper pasted without changing the construction method.

Mr. Ryutaro Suzuki, the 7th generation owner of the long-established store “Suzuki Mohei Shoten” that has continued for 150 years, maintains the making of lanterns as a traditional craft. On the other hand, he has created the “Suzumo Lantern,” a lighting fixture that can be used as an interior object by incorporating the inspiration of the contemporary artist and graphic designer Mic*Itaya, whose works are permanently preserved in the MoMA-The Museum of Modern Art along with cutting-edge technology by young people,

This exhibition will introduce the “Suifu Lantern” handed down from generation to generation and the innovative “Suzumo Lantern.”

Organized by The Nippon Club
Supported by the J.C.C. Fund
(Philanthropic Fund of Japanese Chamber of Commerce and Industry in New York)
In cooperation with Sekisho Corporation
Curator: Mie Tsunobe

“Giving light from Japan to the world”

The history and usage of lanterns in Japan, the historical background from Suifu lanterns to Suzumo lanterns, the manufacturing process will be introduced in a video produced by Mr. Kota Suzuki. In addition, Mr. Ryutaro Suzuki and Mic*Itaya will live online and talk about the innovatively evolved “Suzumo Lantern.”

For entertainment, we will welcome MAGUS, an illusionist magician, to show off the magic, for the lantern as light has a fantastic meaning of slashing the devil in the dark.

A suggested donation for Let’s Support COVID-19 Fighters!
*up to 500 people

＊The event will be held in Japanese, but The Nippon Club will be providing real-time subtitles in English through Wordly.
＊This event is an online event via Zoom. The actual event is not being held at The Nippon Club building.

7th Generation Owner, Suzuki Mohei Shoten
In 1865, the 4th generation Mohei Suzuki founded Suifu Chochin (Lantern) in Mito City, Ibaraki Prefecture, at the knee of the Tokugawa Gosanke family. The greatness of traditional Japanese industry lies in its functionality, and the characteristic of Chochin, which is everyday items, is “folding.” On the other hand, while maintaining these traditional Chochin making, “Suzumo Chochin,” an art object with functionality that illuminates the future from a new perspective, was born in collaboration with artist Mick Itaya.

Graduated from Tama Art University. He is a visual artist and designer. He is a future poetic romanticist who loves the glitter of the sun and stars, the angels and goddesses drawn with flowing lines. On the other hand, he designs music, fashion, mirrors, and in recent years, the functional lighting fixture “Suzumo Lantern.”

Illusionist / Magician / Director. In Japan, he has appeared on countless T.V. programs and has become a topic of conversation by performing close-up illusions and the latest mentalism acts that defy conventional wisdom. He is now one of Japan’s leading illusionists in both name and reality. Award・The Japan Cup 2020・Magician of The Year 2018/2020・The Merlin Award 2018