Far from Home by Saeri Kiritani

Vienna, the golden city, the city of music and art, is one of the fascinating metropolises in the world. People come to Vienna to improve their lives, expand their horizons, and seek new opportunities. Some of them must overcome many difficulties to reach it. Nevertheless, they arrive in Vienna with their dreams and hopes intact.

Ms. Kiritani started this project when she was an artist-in-residence at the Academy of Fine Arts, Vienna. She interviewed 16 people who came to Vienna from abroad, including students, refugees, and immigrants. They came from Afghanistan, Syria, Iran, Kosovo, Palestine, Ghana, China, Korea, Japan, Germany, Sweden, and Mexico. She asked them about their home countries and wanted to hear them speak in their native tongues. While listening to these interviews, she felt their longing for all the things that they had left behind in their native lands.

“I saw connections between Vienna, my current Home in New York, and my hometown of Kanazawa, Japan. I noticed that Vienna’s interiors and exteriors overflow with golden ornamental patterns. This reminded me of the famous Kanazawa gold leaf and art deco buildings in New York, such as Rockefeller Center, Chrysler Building, etc. This link between the three cities, the culturally rich golden color, left a strong mark in my mind and inspired this work.

This exhibition was initially planned to open in 2020; however, Covid-19 has spread worldwide. Without exception, New York has been struck by a coronavirus, and the exhibition has been postponed several times. Then the war broke out in Ukraine this February, and this event shook the world. I pray for peace in Ukraine, thinking about people who have fled Ukraine, who are far from Home,” says Ms. Kiritani.

It has been over two years since initially planned, and she is delighted to share this work in an exhibition at The Nippon Club.

Far From Home is a 60 min long, 3-channel 3D-sound video installation. It was exhibited in 2018 at the 21st Century Museum of Contemporary Art in Kanazawa, Japan, and in 2019 at the Embassy of Japan in Vienna, Austria. 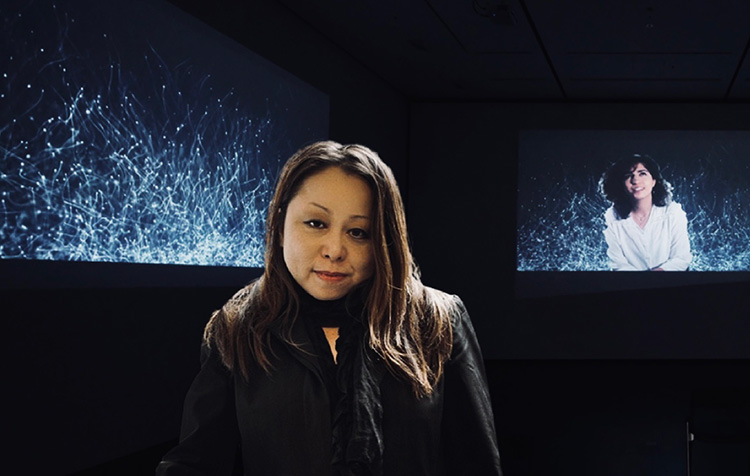